Edit
watch 01:40
The Sandman Will Keep You Awake - The Loop
Do you like this video?
Play Sound

Baphomet is a secret boss in Barony, being fought after the player travels to Hell and progresses through three floors of demonic hellscape. It is located on the twenty-fourth floor of the dungeon, waiting inside a large arena to do battle with the player.

Baphomet is a hard threat to locate, being hidden behind a portal inside the Ruins at the eighteenth floor, past the subsequent Underworld portion and past three floors of Hell proper. Given how the Underworld is generated, as well as the defensive design of the Ruins portal, a player must be well suited with some form of levitation to make their way to Hell.

Once inside the arena, Baphomet will begin the battle in the center of the arena, screeching out before starting the battle. While dueling with the player, Baphomet follows a three-phase cycle of attacks, where after completing one attack phase, Baphomet submerges into the lava and emerges in a new pool to start the next attack. There are special properties to the arena itself, such as preventing spells or pickaxes to break blocks, and disabling teleportation.

The first attack after entering the fight, Baphomet rises from one of four lava pockets near the corners of the arena, followed by a dense spray of fireballs from its hands in a fanning motion. While this attack is very deadly at close range, the even spread of each fireball at longer ranges allows players to dodge by strafing in between fireballs. This attack can have several consecutive sprays of fireballs before Baphomet proceeds to the next attack.

Baphomet rises from one of four lava pockets inside the indentations on the outer walls of the arena. Here, it calls down three waves of boulders, one covering one half of the arena, the second for the other half, and the final wave spanning the whole arena. Some boulders are replaced by a lava-charred version, which rolls down the arena faster than the normal variant, exploding when destroyed similarly to a potion of firestorm, as well as ignoring lava pools.

Each boulder has a one-tile spacing between each, allowing a player to sift past each wave. The third wave alternates its orientation from the previous waves, so that the tiles which were rolled down by the preceding waves of boulders are now safe to stand on, and vice versa for previous safe lanes. The lava pools also serve as minor protection against the normal boulders, as they will fall into the lava instead of rolling towards the player.

Since this attack merely covers the solid land of the arena, levitating on the outside pits of the arena will keep the player safe. To prevent players from flying over to Baphomet and wailing on it while the attack runs for its full duration, Baphomet casts a protective barrier of rotating bloodletting bolts which will rapidly damage anything which comes into contact with it. Baphomet also casts out fireballs during this attack to further protect itself, as well as summoning Imps to the player's position if they are hovering outside of the arena's ground.

The final attack is when Baphomet rises from the center of the arena, soon after summoning several demonic enemies to the battlefield. A few enemies are immediately summoned at the beginning of the fight as well. This list includes Demons, Imps and Shadows, allowing the player to be attacked by more sources of ranged and melee attacks.

The enemies themselves are much less dangerous than the devil itself, often only serving as distractions to the battle. They can however be used to accidentally absorb both of Baphomet’s other attacks, so keeping them on the field as impromptu meat shields can be a viable option. After summoning enemies, Baphomet restarts its cycle, proceeding to the next fireball spray.

Once Baphomet sinks to its demise, the left wall of the arena breaks open and a bridge forms to reveal a path for the players to escape by. Simultaneously, two Minotaurs are summoned at the two corners opposite to the breach in the wall, now giving chase to the player. They can still be killed, but doing so without properly equipped can end disastrously.

The pathway outside of the arena is filled with plenty of random Hell enemies. While defeating them is not mandatory, their presence can impede the player in their flee from the minotaurs. At the end of the path, a portal allows the player to exit Hell, teleporting them to Hamlet after showing a short text scroll.

Unlike other bosses in Barony, backstory and mentions of Baphomet before its confrontation is surprisingly lacking. Unlike Baron Herx or the Archmagisters, Baphomet has no dialogue and except for a single book, lacks any kind of exposition or actual lore to speak of.

In “The Adventurer Who Went To Hell”, Herx is confronted by an adventurer who is intimidated by his appearance. Instead of doing battle with him, Herx offers the adventurer to instead battle with the devil for a chance to live in luxury. This led to the defeat of the hero at the hands of the devil allowing the baron and the devil to reap his soul.

What is more important for Baphomet’s importance to the story is what they accomplish in their relations with Baron Herx. Instead of letting Herx die in the Mines after being locked inside, Baphomet makes a deal with him to evolve into a lich and get revenge on Hamlet in exchange for his servitude. After destroying Hamlet, Baphomet’s influences over the world would spread through Herx’s efforts. Once Baphomet is defeated however, Herx’s deal is forfeited, and he dies shortly after.

Baphomet launching off a fan of fireballs towards the player.

Baphomet raining down boulders down the arena.

Baphomet summoning demonic creatures to help in the battle.

The Easter egg of My Little Pony charactre Rainbow Dash hidden deep in the walls of the arena. 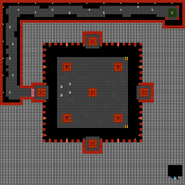 The arena as seen through the Barony Editor named "hellboss.lmp"

Community content is available under CC-BY-SA unless otherwise noted.
Advertisement