Fountains a randomly occurring object found throughout the dungeon in Barony, providing a high risk/high reward option for the player if they so choose to drink from the fountain's waters.

The Fountain can rarely be found at random spots throughout the dungeon, more frequently appearing in rooms designed for their presence. Rooms with fountains in the Mines are often singular, or have two fountains separated by lock gates and a wall, while similar rooms in the Sand Labrynth or Ruins are wide and spacious, housing dozens of fountains at a time. Similarly to Sinks, Fountains have a secondary use of extinguishing burning from a player, as well as filling up empty bottles for alchemy.

In the Myths and Outcasts DLC, Goatmen also have a unique interaction with Fountains, in that they will yield between one and three potions when interacted with.

Each fountain can be used once, where the player drinks from its waters. Doing so will often provide a special effect onto the player, either positive or negative. These effects includes:

If the player has access to Empty Bottles, they can left-click on the fountain with the flask in hand to bottle up some of the fountain’s water instead of drinking it. Going so has a high chance of draining the fountain like normal, but there are rare cases of the fountain being able to fill multiple bottles.

The resulting bottle will be an unidentified plain potion of random color and type. This allows a lucky player to find powerful potions such as Potions of Levitation as early as the Mines, where that kind of potion would only be found far later into the game naturally.

Unstable Potions, as well as Potions of Strength are exempt from this bottling method. 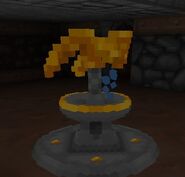 The current design of the fountain. 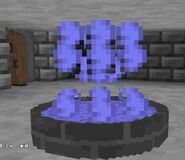 The old design of the fountain.
Add a photo to this gallery
Retrieved from "https://baronygame.fandom.com/wiki/Fountain?oldid=7083"
Community content is available under CC-BY-SA unless otherwise noted.