The Haunted Castle is a secret area in Barony, found in The Swamp at the eighth floor, requiring the player to dash underneath several consecutive boulder traps to access the portal. Here the player is presented with a looming castle in the center of the map, with scattered items on the outer walls. More loot and an artifact lies inside the castle, but those willing to rob the castle will face radical consequences.

The Haunted Castle is on the surface a very easy secret area, having a player begin with a fountain to use and at least a dozen or so items of varying quality and types scattered around a square track. The player starts in the bottom left corner of this track, with the portal to leave the area at the top center of this track. If the player needed to, they could take any items they found and leave just as soon as they arrived.

However, the main interest of the map is the castle which is encompassed by the track, connecting via a drawbridge at the bottom center of the track. When the player approaches the closed gates of the castle, they open up and the player can enter.

The castle interior is a small place, with access to a main hall and several rooms that shoot off of it. Illuminating the center hall is a fireplace, comprised of two campfires.

In the room immediately to the left, you will find a small library with a chest, while to the left is a small room with a table and 3 piles of gold. To the middle right, there is another room with 2 sinks, while the upper right contains the Oracle’s Treads, a table and chair, as well as 2 chests. The upper left room only contains a medium pool of water and a chair. Finally, behind the fireplace are 6 piles of gold in a secret compartment.

Once the player has collected any important items inside the castle, such as the Oracle Treads or piles of gold, the haunted aspect of the castle will become apparent. The outer track will now be lined with numerous gravestones, each containing at least a single enslaved ghoul once the player attempts to leave the castle and head to the exit.

Unlike normal gravestones, which require inspection by the player to disturb the dead, these are provoked by the player merely walking near them, causing the whole row of undead to rise. This is further compounded in difficulty by the random wandering of ghouls into new sections of track, which will also provoke that section’s line of ghouls.

In order to get out of the castle and to the exit, the player must make a mad dash towards the exit portal located at the opposite end of the track from where the castle meets up with the outer rim. From there, the enslaved ghouls will begin to emerge, causing the player to either rush to the exit ahead of the ghouls, or to stop and stand their ground against the undead.

Since the gravestones spawn ghouls only by proximity of players or dropped items, make sure to either keep collected items from the outer track in one’s inventory, or at least toss any unwanted items into the abyss at either side so that they do not cause the undead to spawn early.

If the player is a Vampire, or has access to levitation via potion, steel boots of levitation, or having the levitation spell, they can float around the sides of the castle wall without disturbing the dead, and leaving through the portal without any danger.

If the player is a Skeleton, then this aspect of the level can change from a massive hindrance to one of its most lucrative aspects. Since ghouls are peaceful with Skeleton players, they can only watch as the player walks on by with any loot from the castle they want.

Even better, is that the player can recruit the ghouls into their party, easily filling out their brackets and ready for the next floors. Given that these are enslaved ghouls, they have access to life stealing and are generally as fast and tanky as most other monsters in the dungeon, making a team of them a surprisingly formidable force once amassed.

Several enslaved ghouls that have risen on the outer walls of the Haunted Castle.

The gold room inside the castle.

The small library inside, with a treasure chest.

The treasure room, with Oracle's Treads still on the pedestal. 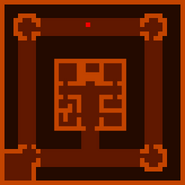 The complete map of Haunted Castle.
Add a photo to this gallery

Retrieved from "https://baronygame.fandom.com/wiki/Haunted_Castle?oldid=7025"
Community content is available under CC-BY-SA unless otherwise noted.