The Minotaur Maze is a secret area found in Barony, found inside The Sand Labyrinth at the thirteenth floor, concealed in a sand brick tomb surrounded by lava, and requiring a Pickaxe or spell of Dig to enter. When entering the portal, the player is put at one end of a large maze with the goal of getting to the end and possibly obtaining the powerful artifacts in the center, all while evading the pursuit of the titular Minotaur.

As the name implies, the Minotaur Maze is laid out like a large maze-like structure, with walls that tend to be two tiles thick and having many branching pathways either to another part of the maze or to a dead end where the player can be pinned and attacked by the Minotaur. The player spawns in the southeastern corner of the maze, where the exit portal is located at the southwest portion.

In the center of the map are two artifacts: Gungnir, the artifact spear weapon that pierces enemy defense, and the Red Mystic Orb held on top of a pedestal. Picking up the orb will cause all the gates surrounding the center room, allowing for passage if the player can levitate.

In order to make a trip to the maze a smooth endeavor, it is best to first familiarize oneself with the layout, as it is predetermined like all other secret locations and can help tremendously in avoiding dead ends and minimizing time for the Minotaur to catch up with the player.

Several utilities in the form of equipment, spells or other forms can help immensely in making it out of the maze unscathed. Levitation can be used to escape the center of the maze with both artifacts without doubling back to the main path, likely saving a hit or two from the Minotaur. Combining levitation with a spell of opening can also cut down on travel time by opening a closed gate to enter the center room early into the chase.

Spells of Dig or a Pickaxe are required to access the Minotaur Maze, and having them during the pursuit can provide a massive edge if used intelligently. It should be noted that if the Minotaur has not spawned yet and the player attempts to dig, the Minotaur will then spawn immediately and give chase.

Since most walls are two-blocks thick, the benefit of digging can be hampered in some areas. However, certain walls such as the back wall of one dead-end can allow the player to instantly open up the room for the exit portal from the opposite side. Further application of digging exist, such as to cut around locked gates when access to spells of Open are limited but levitation is available to accessing the center room quickly.

If worst comes to worst, fighting the Minotaur may be the only viable option left. If so, using offensive magic spells of any kind works very well against the Minotaur, as slowing spells like Slow or Chill allow most players to outpace it, while offensive spells can quickly whittle down its health at a safe distance.

Use of Unstable Potions can provide a massive source of damage against the Minotaur, requiring at least an Alembic, Bottle of Acid and any of the various secondary potions required to form the brew. Potions of Icestorm is notable in this case, since they not only deal exceptional damage, but slow the Minotaur like a Chill spell, allowing the player to use it either to escape the Minotaur if battling becomes too dangerous.

At this point in the game, if the player has been diligent in collecting most of the artifact armor pieces alongside normal armor for unoccupied slots, the damage of the Minotaur can be heavily reduced to acceptable levels, allowing normal melee combat to continue. 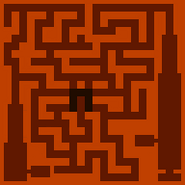 The layout of the Minotaur Maze. 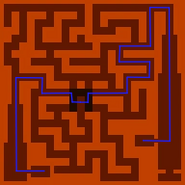 A pathway that a player with access to Levitation and Digging/Opening can take. 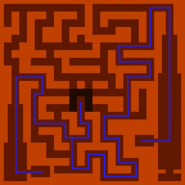 The shortest possible path a player without Dig, Levitation and Opening can follow.
Add a photo to this gallery

Retrieved from "https://baronygame.fandom.com/wiki/Minotaur_Maze?oldid=7144"
Community content is available under CC-BY-SA unless otherwise noted.