Not to be confused with Skeletons, the enemy type.

Skeletons are a monster race option in Barony, introduced in the Myths and Outcasts DLC alongside three other monster races. It serves as a very slow playing archetype, enabling the player to take their time on floors for maximum yield at the cost of effective regeneration to allow faster runs to function.

Skeleton is a very good race in concept, with an exceptional potential for clearing out floors without the need to work around hunger. This allows games to easily balloon in the time they take, as well as letting a player play without much urgency of being penalized by hunger if they are taking too long. However, the lack of food comes at a massive drawback of health and mana regeneration being quartered compared to normal races, making a skeleton's ability to take their time a complete necessity if the player is hit too much, as regenerating damage takes quite a while otherwise.

Playing as a caster and a Skeleton may be challenging, given the reduced mana regen. However, playing towards classes with high levels of mana can serve a Skeleton really well, since if they have 75 mana and are killed, they are instead revived and have any remaining mana emptied. This is a clear advantage for casters, as they can enhance their casting proficiency to make further revives take less time to recharge. It also allows items such as Potions of Restore Magic to function as makeshift amulets of Life Saving.

When swimming in water, movement speed is further reduced for a skeleton, making any form of water walking a very powerful asset. Fortunately, practicing swimming to legendary status is an easy task, as the player does not have to worry about hunger forcing them to move along.

In terms of whom they can affiliate with, Skeletons have limited access compared to some other races. They can align with Automatons like all other races, as well as Ghouls. This may seem limited, but works very well given the role of Ghouls and how they are spread throughout the dungeon.

Gravestones can be commonly found in the Mines and Swamp, so interacting with it may disturb the undead and gain the player a new tanky ally early on. Alternatively, locations such as the Haunted Castle use Ghouls as its main threat, making a Skeleton's trip there an easy breeze and an excellent spot to pick up some strong allies in enslave ghouls. Even as far a Bram's Castle, the player can still make some friends with the Ghoul Chef, and second floor is full of enslaves ghouls only one floor away from the final boss fight.

Since Skeletons are a monster race, they are targeted by both Humans and Shopkeepers, requiring a fight or a quick escape if they see the player. 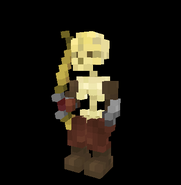 The appearance of the Skeleton. Note that both male and female skeletons use the same player model, but will be granted the gender-specific increases to player stats.
Add a photo to this gallery
Retrieved from "https://baronygame.fandom.com/wiki/Skeleton_(Race)?oldid=7296"
Community content is available under CC-BY-SA unless otherwise noted.