Sokoban is a secret area found in Barony, found in The Sand Labyrinth at the eleventh floor, concealed in a sand brick tomb surrounded by lava, and requiring a Pickaxe or spell of Dig to enter. Inside is a game of Sokoban, where the player must push multiple boulders into the corners of the map.

The area where Sokoban takes place is comparatively smaller than most other secret areas, with an external side-area where the player spawns and the exit portal at the opposite end of the hall. Connected at the center of the hallway, the arena of Sokoban is full of inconvenient walls placed around seventeen boulders.

Here, the player must push all the boulders into pits found at the corners of the arena. Doing so with all seventeen boulders will spawn a message “The gods of Sokoban greatly reward your abilities!”, providing the player with an artifact, the Djinni’s Braces, on a podium at the back of the arena. On top of that, there is also a ton of gold piles lining the exterior hallway after completing the puzzle.

Compared to the mortal danger most secret areas pose to the player in order to obtain their reward, Sokoban is very much a puzzle, requiring more wit on the player’s surroundings than combat expertise. This is reflected in how there can be no enemies to fight in this area if the player plays Sokoban without breaking any boulders.

If however the player uses something like a Pickaxe to break one of the boulders, they will receive a message that “the gods of Sokoban are angry!”, with a random Sand Labyrinth enemy spawned where the boulder was destroyed to attack the player. Provoking the gods can be repeated for each boulder.

If the player completes the puzzle but had smashed one boulder, the normal victory text changes to “The gods of Sokoban were mildly entertained.”, still spawning the artifact, but providing a few less gold piles at the exit.

When the player breaks three or more boulders, the message changes again, now to “The gods of Sokoban were less than impressed.”, causing the Djinni’s Brace to not spawn at all. As more boulders are broken, the less gold is rewarded at the end of the puzzle. 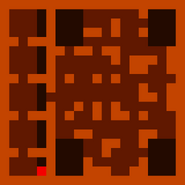 The map of Sokoban without boulders. 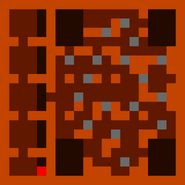 The map of Sokoban, with all the boulders colored gray.
Add a photo to this gallery

Retrieved from "https://baronygame.fandom.com/wiki/Sokoban?oldid=7146"
Community content is available under CC-BY-SA unless otherwise noted.